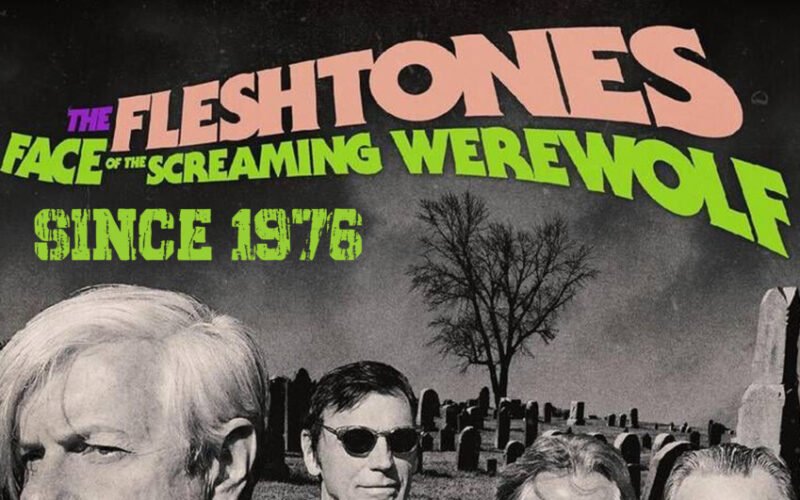 Giovedì 6 Ottobre ore 21.30 The Fleshtones Live – 10 euro prev. 12 in cassa fino ad esaurimento posti.
https://www.paypal.com/donate/…
Dalle 18.30 start apericena musicato “Canzoni con fonovaligie” by Naska.
Beyond The Call Of Duty -The Fleshtones
Where do we start? Dubbed ‘America’s Garage Rock Band’ and ‘The Kings Of Garage Rock’, the Fleshtones have been the subject of books (Sweat by Joe Bonomo, Continuum Press 2007) and movies (Pardon Us For Living But The Graveyard’s Full, 2009) as well as amazement from fans and detractors alike. Carelessly (to the purists) tossing together the fuzz-guitar and Farfisa organ riffs of so-called ‘garage rock’ with rockabilly, soul, and surf, The Fleshtones are well into their fifth decade of making believers out of the most jaded nay-sayers with their mongrel stew known as “Super Rock”.
Why? After years of messing around, the group finally formed in 1976 when vocalist/keyboardist Peter Zaremba, guitarist Keith Streng, and bassist Jan Marek Pukulski, picked up a bunch of cheap Japanese musical instruments they found abandoned in the basement of the Whitestone, Queens house they were renting. Aiming to return rock and roll to the simplicity and unselfconsciousness of it’s pre-arena rock days, and make sure their friends would have as much fun listening to rock & roll as they had enjoying the music they loved (as well as increase their popularity), the group launched a series of outrageous house parties, coming to the attention of neighbors and the NYPD alike, before debuting at CBGBs in May of that year. They have been earnestly rocking ever since, a record not held by any other group from those heady days (The band was typically not referenced in the 2013 movie about the club which was filmed in Savannah, GA and starred an Englishman as CBGB owner Hilly Krystal).
Audiences were often taken aback by The Fleshtones riotous stage performances, which were amplified by the maniacal presence of sax-playing high school buddy Gordon Spaeth (who sadly passed away in 2005). After Alan Vega of Suicide brought the band to the attention of musical mogul (and former mentor of The New York Dolls) Marty Thau, the Fleshtones recorded an album for Thau’s new label, the now legendary Red Star Records. Unfortunately (a word often associated with the career of the band), only a 45, the classic ‘American Beat’, saw the light of day at the time. The world, and The Fleshtones, would have to wait.
Retrenching and reorganizing, now with Bill Milhizer behind the drums, the Fleshtones were signed to Miles Copeland’s revolutionary I.R.S. label in time to appear in the movie Urgh! A Music War and release their first 12″ EP Up-Front. The next year saw the release (finally!) of their first full-length album, Roman Gods, the title track of which cracked the top-25 dance charts, soon to be followed by their ironically-titled milestone LP Hexbreaker.
Singer Peter Zaremba brought the idea of “alternative rock” into the homes (and college dorms!) of America as he hosted the beloved The Cutting Edge on the much-less beloved MTV. The band continued to record and more importantly to play, through the ’80s into the ’90s, releasing Speed Connection mere hours after it was recorded ‘live’ at the historic Parisian rock and roll venue ‘Gibus’ (it was a blast having Niles Strange of the Strangeloves on stage with them) and the self-produced Fleshtones Vs. Reality (guess who wins?). Powerstance was produced by admirer Dave Faulkner of Australia’s Hoo Doo Gurus, marking the debut of bassist Ken Fox, who replaced Andy Shernoff of Dictators fame in the line-up (Ken has been the ‘new guy’ ever since). Beautiful Light aka Forever Fleshtones was produced by another admirer, Peter Buck of R.E.M., with the band carrying out further experimentation with Steve Albini in the Laboratory Of Sound.
While experimenting, the group dipped even further under (off?) the public’s radar in the last half of the ’90s, but in 2003 the group bounded back when they joined up with the potent indie label Yep Roc Records, whose founder had sworn while still in school that he would someday start a label with the expressed purpose of signing the band. They released one of their best albums, Do You Swing, soon followed by Beachhead and the even more critically acclaimed Take A Good Look, proving that the guys can still take their gloves off when needed. The Fleshtones then fulfilled two long-time ambitions, first by collaborating with equally long-time friend Lenny Kaye in the recording of the instrumentally-oriented Brooklyn Sound Solution, then by recording the Spanish language EP Quatro X Quatro with pal Jorge Explosion in Spain. The band has recently joined their friends Los Straightjackets and Southern Culture On The Skids in a ghoulishly festive tour to promote their collaborative Hallowe’en album Mondo Zombie Boogaloo, as well as a new ’45 spotlighting the vocal talents of SCOTS’ own Mary Huff entitled “For A Smile” b/w “Everywhere Is Nowhere.” Another Fleshtones ’45, the Keith Streng-vocalized “Available,” backed with the Alan Toussaint composition “Let’s Live” released in November, will be followed by the long-anticipated new Fleshtones LP Wheel Of Talent in January, 2014.
So let the wheel keep spinning. What else do you need to know? Check out The Fleshtones while you can -you owe it to yourself.
+ Google Calendar+ Esporta iCal